What was Clash Central?

A passion project, Clash Central was a learning tool; used by the creators to further their insight into our interests. Through many iterations, as Clash Central got better, we got better. It functioned as a group creation utility, allowing players of the popular fan-game "Corporate Clash" to coordinate groups to play together.

Clash Central was created in 2018 by a small team of individuals looking to provide a ToonHQ like experience. At the time, Clash Central’s only working function was an invasion tracker that was poorly coded and made obsolete by other tracking services, such as the Corporate Clash Discord bot, and an API that often did not reflect actual in-game events.

It was not until 2019 that the primary maintainer of Clash Central graduated high school and finally began to learn how to cobble together some working code. Our ‘groups’ page was created and invasions were finally serviceable. Although, this is what a group looked like...

Technically it worked, but everything was dropdown lists. Oh! And did you want to create a building group? Yeah, sorry, we couldn’t help with that. The design was, to be frank, abysmal, and no way was ever going to be of any assistance to the players of Corporate Clash.

However, Clash Central also was intended to be a project. It was a motivating factor for everyone involved to continue to grow in their ways. The website got better over time. Eventually, we released a usable group tracker to the public; in partnership with Corporate Clash. The release was advertised to the mass on May 28th in a post on Reddit and Twitter. It drew a massive response immediately on both platforms. 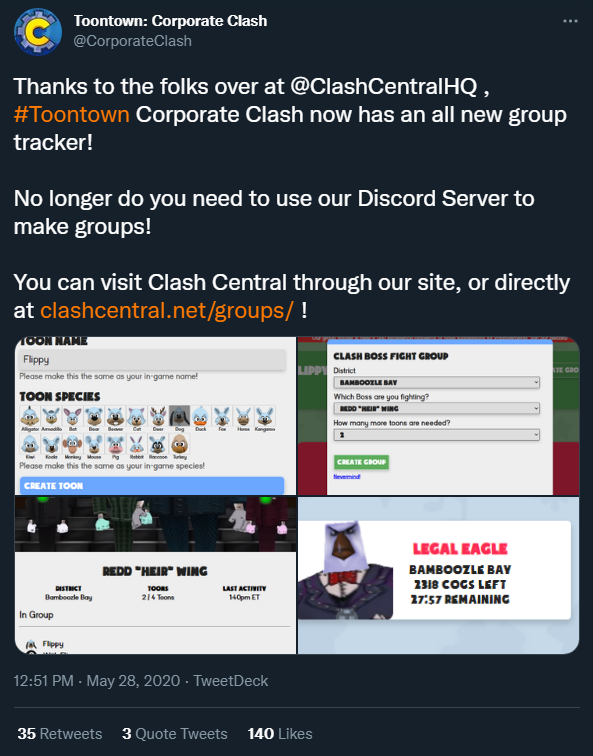 In the month before the release of Corporate Clash v1.1.0, Clash Central and Corporate Clash surged in popularity. Garnering over 6,000 unique visitors in the weeks leading up to July 1st, 2020, it was clear that Clash Central, and the hype around the v1.1.0 update, had brought back thousands of players and inspired new ones to try the game.

But development was far from complete. With the new influx of players came an incredible challenge. Maintaining the site proved difficult in the beginning. The site migrated three times before finding a suitable hosting provider. The team did not take a break for several weeks. There were plenty of sleepless nights to be had! In June of 2020, Clash Central underwent three overhauls.

Fun fact! Dat Piggy coded, tested, and made live the most major of the changes while in the backseat of a van, on a laptop, amid an exploitive group duplication attack, with a 1X data connection, in the middle of Kansas. Toontastic!

Clash Central reached what was, essentially, its final form around August of 2020, and soon after our team and the developer of ToonHQ began a dialogue. Since our inception, we planned to take Clash Central offline once ToonHQ had added Corporate Clash groups. There was no reason to split the player-base! We also had a great deal of respect for the audience ToonHQ had dedicated time to garnering.

Over 60,000 unique people have visited Clash Central since its inception in 2018. Thank you to everyone who used Clash Central, the experience has grown us more than you’ll ever know.✌️